THE MYSTERY OF TUVAN KHÖÖMEI

Is there a connection between khöömei and shamanic rituals?

The shaman acts as the physical manifestation of supernatural forces. As a representative of an animistic religion, the shaman, like ancient priests, used to heal people with the melodic, droning sounds of khöömei and with the khomus, which was known as aza dyly – the “devil’s tongue.” A few small silver bells were sewn onto the back of the shaman’s robe. According to the Tuvan shamaness Dürzü from Tsengel sumon (county) in the Bayan-Ölgii region of western Mongolia, simply the glint of the silver bells made all the evil spirits which are around immediately fly away.

The khomus a sounds of khöömei were traditionally considered to be paraphernalia of female shamans. Tuvan shamans believed that the ringing of the bells made black clouds disappear and evil spirits go away. Tuvans always thought of the bells that were attached to the back of shamanic robes as living beings, in many ways similar to humans.The belief in the beneficial effect of the bells sewn on the back of a shaman’s robe is based on the fact that humans’ inner organs are attuned to certain tones, and the whole body is a sensitive musical instrument that resonates with the surrounding sound field. The lower tones of khöömei have a calming effect, while the higher tones have a stimulating effect. The ringing of bells heals children with mental disorders. It was even a custom in Tuva to put people “possessed” by spirits “under the shaman’s robe,” as the evil spirits that beset such people could not endure the sound of bells. The same would be done to children who had suffered a severe fright. And when a woman gave birth to a child, the shaman would sing kargyraa.
Why were khöömei and kargyraa, when performed as part of shamanic rituals, associated with treating women during childbirth? Could it be that khöömei is a central energy “channel,” the “core* of the human body or of the spinal cord? The problem is how to teach every person to turn his attention inward, inside himself. Our internal being is the manifestation of that energy that is called the energy of the universe.

This publication is protected by the law of the Russian Federation ob avtorskom prave ( ” On copyright”) . 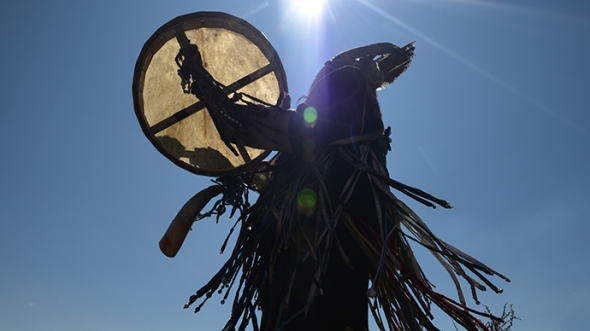